Dear readers, I may have new information on how little nasty baby came to be. Now to settle the stomachs of my kin, no this is not a blog about sexy stuff in fact it is a blog about pretty much the opposite of all that. I’d like to take this opportunity to introduce you to The Disgustingtons. 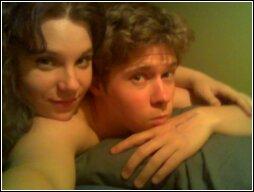 I recently headed up to the interior to visit my parents and to peruse Vernon’s yearly chaotic craft extravaganza the appropriately named “Creative Chaos,” because of the sheer magnitude of people. People with babies. People with babies and strollers. People with babies and strollers, zero manners or group-setting etiquette. T’was a delightful weekend back in my hometown of nineteen years, but by the time I hit the hometown soil I was missing Hubby big time. Frankly, I can’t go to the grocery store without missing my Hubby. We’ve always spent too much time together but now we obviously fused into a single being, so when we are separated it physically hurts because he and I have been torn in two again. (Sentimental, slightly sexy reference ahead) our natural state is literally on top of one another with the two pets squeezed into our entwined body’s nooks and crannies. It is a devastatingly cute scenario for three seasons of the year, though in the summer it’s a god awful mess, sweaty too. We call it a ‘real pile’ after the Wild Things, because that’s exactly what it is. A physical expression of our family’s unity, and we are working on making room for baby in our animal pile. Now by the time I arrived back home on Sunday, a mere two days after leaving town the first thing we did was grab each other up into one of the best hugs of recent memory. I barely parked the car straight and I don’t remember if I turned the ignition off, but right there in our underground car park, Hubby and I squeezed each other for an unreasonable amount of time. We finally get the bags into the elevator and through the front door of our apartment but quickly drop them and embrace again. He was almost late for work because we couldn’t stop ourselves from being completely ridiculous and to the outside world, intolerably sweet. So this is how I came to realise how baby was created. Maybe this baby wasn’t planned and sought out with a single-minded steely determination but it sure as hell was made because two people from different worlds made a solid connection and a love that is pretty damn powerful. Hey, Carole King, I’m telling you I feel earth move under my feet on a daily basis. Beat that.

That little ditty may convince you of why we call ourselves The Disgustingtons. Sorry to burst your bubble if you thought that had to be as bad as it gets. No, I am afraid over the past two or three years our “closeness” has morphed into something unnatural and quite possibly sick. Hold on to your hats. When I met J he was a kind yet stoic, fairly nervous fellow especially when it came to intimacy, and I wasn’t much better but the man couldn’t even kiss me without missing my mouth. He was jittery and quiet and both of us were new to the nuances of the exclusive relationship. For months and months we carried on this ridiculous show of newbie boyfriend/girlfriend status as I’d rush to fix my makeup if I stayed the night before he woke and he’d do things like pre-clean his apartment before my arrival or turn the faucet on in the bathroom if he absolutely had to pee and could not hold it. We were the perfect picture of a couple striving to be as proper, clean and respectful in those early months, but skip ahead to four years later just before we tied the knot we both were knee-deep in the transformation into our actual selves: Mr. and Mrs. Disgustington.

Now I know what happened to me, because I’ve always been rather disgusting in my habits. However, JP just fell victim to my secret lifestyle. I’m sure without having met me he’d still be that thoughtful, nervous try-hard of a man. In many respects I ruined him in the sense that he’d have trouble on the dating circuit if we ever split up, but also he is ruined in the sense that he fits me and only me perfectly. We’ve got an open-door policy on the bathroom pee now; frankly it’s where we have our best conversations.  Though he hasn’t totally let go of his former self, I’m pretty sure he still hates it when I barge in on him with one of my many inane questions as he’s trying to poop. But sue me, I was never taught any differently. Also, I am impatient and I refuse to wait for poop. Hubby has also stopped trying to make me realise I am a human and not an ape. Apparently the obsession of picking, scratching, rubbing and removing of any foreign object from one’s mate isn’t appropriate outside the animal kingdom according to him. Sure, it is just me that is guilty of this one act but we both inspect each other for red bumps, blemishes and the rare, but glorified mega-pimple in our daily grooming routine and we are both guilty of the disgusting actions that take place once something popable is detected. We are the worst (and by that I mean the best and undefeated) for naked lounging. We are naked loungers. Actually, we are also naked cooks. Naked computer-users. Naked sleepers and naked getting-uppers. If it is noon on either of our days off from work you can count on the fact that no, we do not have pants on yet. Will one put clothes on while the other is still in naturalist mode? No, because we talk each other out of it. Now, we also talk each other into things too, but disgusting things: multiple meals, daily break-into song moments and random “this will only hurt for a second” situations. I list these things vaguely for a reason. My husband and I are not just close friends who happened to be married. No, we are two indescribably disgusting people that are breeding little Disgustingtons without the restriction or governing of any outside party. There is a possibility this is the start of us taking over the world.

I’m beginning to wonder if it is responsible to bring a child into an environment like ours. What is worse than that is that I already know you can’t raise a kid when you are used to days where your body never sees clothes! Is having a child worth giving up the sheer joy of singing Journey’s “Don’t stop believing” while you and your hubby scramble an egg, naked and without shame?

Just another reason why I may not be ready for motherhood.