Considering I got a “loving earful” as a reaction from my family when they read my last post, I’ve decided maybe this week I best blog again with my positivity hat and shoes on.

But sadly, on the tail end of another night where Jonah didn’t really sleep and Hubby and I sat in silence out of necessity to not start fighting … frankly I am not feeling too peppy. Don’t pick up the phone mom, J and I had it out and subsequently made up right afterwards. Hubby and I don’t “fight” as in yelling back and forth or throwing punches to the nose. Our style is much mellower. It usually goes like this, we sit and stew for several hours (and in the case of last night, we took care of Jonah and stewed for more like eight hours.) In our combined silence, J falls into a depression because he can’t deal with me being angry, and I burn up with rage because he’s not talking whatever it is out with me. Finally, I usually break after my anger has simmered and I’ve begun to feel as badly as he does. Then we have “the talk” and it’s not necessarily heated. It is rather quiet but that doesn’t stop the conversation from being intense or for J, not filled with unforeseen landmines. Both of us tend to unload at first and for the one on the listening end it can be a lot to take in, but let’s face it poor Hubby is usually the listening party. Anyway, we both always end up crying but by the time another hour goes by we are saying I love you, apologizing and some times, actually more often than not we are laughing about something else because the conversation has moved beyond each other’s gripes and groans. A friendship foundation means you’ll always have something else to talk about after the fight. So, in the end around 7 am in the morning, Hubby and I had made up and I had realised it didn’t need to get to where it all escalated to. When I am in my red zone I always think things are worse than they really are and that is probably why I find myself saying things that are over the line or mildly cruel. I felt worse for wear because of that but even more so I felt bad for the energy in the room all night. No wonder Jonah couldn’t sleep – our bad mojo clung to everything like morning dew until we smartened up and cleared the air.

While rocking Jonah back to sleep this morning I got to thinking about a time my Dad turned up a song on his stereo and asked “You remember any of this Kiddo?” I listened to the voice in the speaker and I couldn’t recall it. Nothing about it was familiar. I couldn’t even place the voice of the man singing in a particular band or era of music. Was he testing me? He knows my musical knowledge is unparalleled, is he trying to show me up?! “I used to play this for you when you were a baby.” I guess he figured it should have been burned into my brain. I continued to rock Jonah as he stared up at me while I played music in the background for him. All the lyrics of the gentle songs I carefully picked out seemingly all the more poignant at that moment than they had been before, and so I wondered. Would he remember these songs? The melodies? The words? Would he recall the look of my face staring down at him or the small happy tears falling from my eyes and softly on to his skin? I knew he wouldn’t and oddly it came as a comfort to me rather than a disappointment. If he could forget such a significant moment, such beautiful and meaningful songs than it wasn’t too hard to imagine he could wipe away the memory of his parents fighting too. He could shrug off that awful negative energy that I seem to harness and spread all too well. I think I am beginning to learn a lesson …

I think I might really hate to see Jonah grow up with my same flair for the negative. But, I finally have something positive for you. Literally. My son’s blood type is B+ (take that, mom) so rest assured he can’t possibly turn out exactly like me with my oh-so-appropriate A-negative. Plus, I swear every time Jonah half-smiles at me a little bit of my cynicism and pessimism just melts away. Now if you’ll excuse me, Hubby and I have a rampant pee problem and it is clearly family bath time. Best part of the day so far. 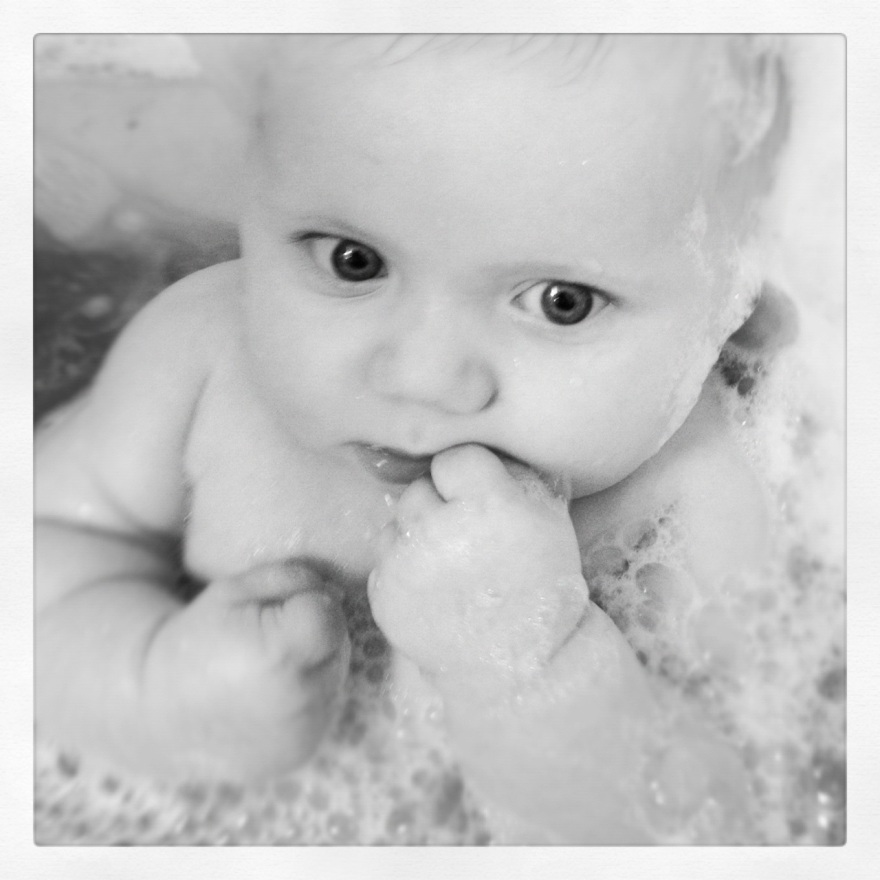 And, that’s not sarcasm.