Well, there was a day a few weeks ago where all hell broke loose in The House of Huyghebaert. I didn’t know at the time but what was bothering our little shireling was a bout of the terrible teething baby rage. He was intolerant of everything that day. Food, air, hugs, love, diapers, stuffed toys, chew toys, bathes, outside, inside, it didn’t matter. Jonah was simply inconsolable and in the end so was I because even though I love him, I wanted to hurl him several feet away and not be responsible anymore. But, by the morning the next day I realized we had both survived, no worse for wear, so I rolled over and said “Good morning Satan,” and Jo jostled around in his crib and smiled at me like yesterday was a figment of my imagination and he was still an angel baby. Not Rosemary’s baby. His crib is right beside the edge of my side of the bed. I can reach and easily slip my hand through the slats and give him a good loving rub down every morning and frankly, it’s pretty precious. If I don’t wake and immediately wriggle my hand through to grab his, Jonah is reaching out in my direction instead. It is really, our one act of tenderness. Why? Because my child is not exactly … a hugger or a lover. My happy little man is a lot of wonderful things but he doesn’t seem to be keen on hugging or cuddling or even equipped to touch tenderly (ask my dog Callie). Maybe this is just how babies are and part of the journey that is his development but seeing his already incredibly independent nature takes a tiny toll on me because I know very well where he could have gotten this trait from.

For my own reasons, I am “not exactly, a hugger or a lover” myself. My husband has long since come to grips with the fact that I’d rather flick his nipple than share a cuddle, and that some days I am just not in the mood for long embraces. I know. It is a shock because I talk about our love with such sentiment and grandeur … and even though our love is epic, I still battle my own issues when it comes to navigating that fifth sense: touch. I wonder what I’ve done or what I did through my pregnancy to imprint this onto my own son. Sure, maybe it is too soon to tell if he is like me or if I am just projecting some of my fears upon him, but nonetheless it has me thinking. I thought part of the perks of having your own offspring was the option of cradling your newborn babe in you arms whenever the hell you felt like it. My kid doesn’t even like blankets or clothes. It’s like a premature evolution of our relationship. He doesn’t want to be hugged particularly so my brain goes, “Ah, no hugs. He doesn’t need you anymore.” Does that come off as insane and mentally unbalanced as I think it does? Probably. But honestly sometimes I start thinking that or worse, the heart sickening “Is there something wrong?”

The truth is I’m growing a little worried. I am his primary parent right now, which basically translates to “mean mommy”. I am with him twenty-four hours a day, so sure I am there when he his bright, happy, full of smiles and new-found excitement but I am also his prison guard, parole officer and punisher. I’m the one who enforces the crying it out tactic when he wont nap, I’m the one that after however many hours of being on her feet loses her cool, I am the one that has to make tough decisions in the moment because it is for now, just me. So, me and my crazy brain start to concoct a reason for his independent ways … I am mean mommy ­so he must be distancing himself from me and it is easy to do because he is predisposed to the instinct to recoil from touch. See? Not insane. Logical. Right?

I rolled over and said “Good morning Satan,” and Jo jostled around in his crib and smiled at me like yesterday was a figment of my imagination and he was still an angel baby. Not Rosemary’s baby.

I think back to the mornings when I wake up to find him still next to me in his crib. He catches my eye and in that first moment of his realizing that mommy is still here, he just lights up. Lights up and does everything he can to grab my hand, get it to his cheek to nuzzle. The morning after his day of sore gums, it was during this routine that he showed me his new—and first— tooth. There wasn’t even a transition of emotions for me. I immediately forgot about the trials of the night before and became a hybrid of tearful and giddy. I guess it felt like my triumph as well as his, something we were sharing together. It made me so happy that day … Jonah is my baby but he isn’t the fantasy baby I had in my head. He is the baby he is, the baby he was meant to be. A beautiful and bright baby. My misgivings are all centered on my fears that I am not the mother I am supposed to be. I just don’t know how much of what I am doing in these early months will affect him the rest of his life. It is such a massively terrifying realization that everything you do, everything from how you treat others to the way you react to the decisions you make big or small, all of it is being absorbed by the little one in your arms. Reflect on that one awhile, will you?

If you’ll excuse me, I am going to go hug the crap out of my kid whether he likes it or not because at least for a little while longer he can’t argue with me. 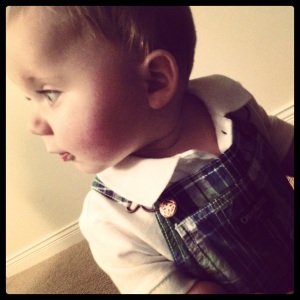