A Return to Breathing

When Jonah jumped freely, with open arms toward me from the edge of the pool and as he clasped his arms around me tightly & lovingly, I finally realised just how much he’s changed in the last year. I watched my son tonight, play with my husband in the pool, Jonah was bright, unafraid, kind to others and adventurous. This, on the tail end of a weekend where my son transitioned seamlessly to a toddler bed, took a shower standing up “like daddy” and actually thoroughly listened to both his daddy and myself, I felt like I was finally in a place long awaited, feeling peaceful. Some of the constant “worry” of parenting faded away tonight and I let myself enjoy my son. Watching my husband play with him filled me with such warmth – I’ll probably remember this weekend for a long time – and it will become my strength in future trying moments. 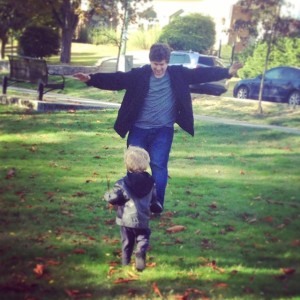 I’ve had a long period of absence from writing this blog. There were moments where I knew I should come to write, there were moments I needed to sit down and write, and there were moments I tried and nothing came. The frustration of the last few months completely clouded over my will to write, and it drained my creativity and because of that I felt even less like myself and I became lost emotionally. It felt like I was a puzzle but my pieces were miles and miles apart from one another. I couldn’t be collected. I was never whole.

As the stress piled up on me and I couldn’t deal, I spent a lot of time just telling people “I felt overwhelmed,” not really going into detail about the nights I spent awake, trying to quiet the of feelings of failure, loss of hope and the emptiness inside left by lacking a creative drive. It began to strip me bare of my sense of self.

I was still working out issues with going back to work, trying to find where I fit in, and how to be a “working mom” but when Jonah started to really flex his muscles in his “terrible twos” I started to feel so tired, yet the worry was so great I couldn’t sleep. After weeks of dealing with insomnia at night, and exhaustion during the day, and trying to take care of a kid who screamed “no,” 24/7, made messes everywhere he went, couldn’t be left alone for a single second, and who refused to behave in public … I started taking pills to help me sleep, but funny enough, the drugs made me feel worse and during the day I had no fuse left to burn. Jonah and I had a few months where we bumped heads because he is my little mirror after all.

Yet, it isn’t like it was all bad, all the time. In fact during those months where Jonah’s attitude tanked, Jeff and I experienced a kind of renaissance in our marriage. I said to him several times that I felt more in love with him than ever, so while Jonah threw tantrums on the kitchen floor before us, Jeff and I some times barely noticed because we were acting like teenagers in love. We got through it because we both individually did the things each of us needed to do for the other to survive. Jeff became more communicative than ever, and I just chilled out. Somehow we pulled together and for some reason that wasn’t something I expected to happen – I suppose I still have a bad habit of expecting the worst, in people and in life – maybe that’s what finally defeated Jonah the Terrible. He saw our united front and feared our bonded power.

It may be too early to say the tyrant my son turned into is defeated, but I feel a shift in the energy in our home. Jeff had a theory that we should just keep treating him like the adult Jonah seemed to think he was suddenly. So, during the day I tried to relax the rules, we let Jonah try to imitate the way mommy and daddy do things more often (even if it makes doing any task take thirty minutes instead of five), we started potty training, and most recently we’ve taken the plunge and converted Jonah’s crib to a toddler bed. All of this combined effort seemed to quell our little T-Rex, enough for us to see that our son is really growing up and making huge strides in his development.

For now, anyway, it seems the storm has passed on. Maybe there is another one brewing but for once, I am not focused on it. I am writing again, and I am going back to work over Christmas with a contract until January for a company I fought hard to be employed by for the better part of a year. My son is in a happy place, he’s healthy and becoming an avid swimmer/thrill seeker. We are seeing him begin to take after his dad a lot more – he’s quite solitary and needs independent playtime more and more. Jonah is speaking two and three word sentences, understanding instructions and is finally becoming more loving and trusting of his mom and dad. With Jonah we really had to earn his trust, and that to me was fair enough because I am just now learning to trust myself as his mom.

When he jumped off the ledge tonight and into my arms, it was the first time in a long time I felt his devout trust in me as his mom. It was also the first time in a long time he clung to my embrace and didn’t immediately try to finagle his way out of my arms. It sounds strange but it kind of feels like now he would choose me as his mom if he had been given the choice at the start. My love for him grows exponentially daily, and today I found myself thinking that it is scary how much I have the capacity to love him.

Somewhere in the struggle of raising kids you find the best and worst parts of yourself. And, somehow that has been the most rewarding therapy of my life.